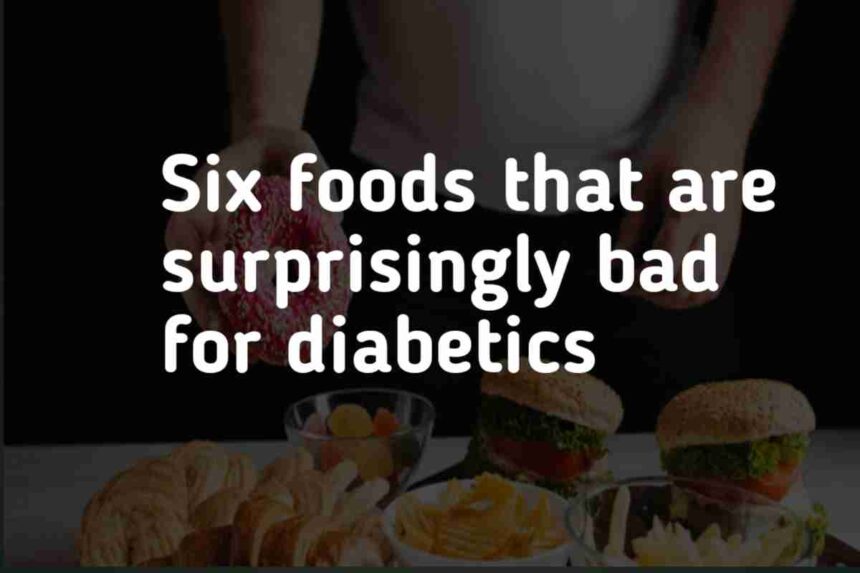 Six foods that are surprisingly bad for diabetics

Worldwide, millions of individuals suffer from diabetes. It hinders the body’s capacity to process blood glucose, also known as blood sugar. Probably every single diabetic patient is aware that normal blood sugar levels require a balanced diet to be maintained. The issue is that many items that are advertised as healthful and are thought to be diabetes-friendly might actually raise blood sugar levels. We’ve highlighted items that many people are unaware are dangerous for diabetics in this article.

Brown rice is frequently the first rice that comes to mind when people think of healthy rice. It is a whole grain since the endosperm, germ, and bran are all present. Indeed, due to its high fiber content, brown rice is healthier than white rice.However, it also has a lot of carbs, which turn into glucose quickly and raise blood sugar levels. To avoid a blood sugar surge when preparing a brown rice recipe, it’s crucial to pay attention to the portion size.

A common practice is to snack on dry fruits. However, some fruits, especially raisins, are not good for those with diabetes. A fruit is dried to remove all of its water, which increases the concentration of the fruit’s different components, including sugar and carbs. Since raisins contain more than four times as many carbohydrates as grapes, they should be avoided in particular. Mangoes, cranberries, and dried apricots should also be avoided. A healthy substitute might be some fresh berries and a little apple.

Yogurt is regarded as a wholesome, digestion-improving food. However, that might only be true if the yogurt is plain and sugar-free. However, the majority of yogurt variants available on the market are fruit-flavored, which means they are high in sugar and carbs. They are often manufactured from nonfat or low-fat milk, which has been stabilized, thickened, and given an additional dose of sugar. A better strategy is to choose plain yogurt and add fresh fruit to it for flavor.

Isn’t fruit juice just as healthful as the actual fruit? Wrong! It’s among the worst things for diabetics, in fact. It affects blood sugar in a way that is comparable to that of soda and other sugar-sweetened drinks. Fruit juices from the store are typically sweetened heavily to enhance flavour.Fruit juices frequently have high carbohydrate content and are deficient in fiber, vitamins, and other elements, all of which may be found in entire fruits, even if the product doesn’t have any added sugar.

In many recipes, honey is frequently substituted for white table sugar. But according to research, natural sugars like agave nectar and maple syrup, as well as honey, can raise blood sugar levels. Furthermore, despite being less processed, these sweeteners have about the same amount of carbohydrates as white sugar. Therefore, it can be a good idea to avoid all types of alternative sweeteners.

For many people, cereal is their go-to breakfast meal. It may, however, be among the worst ways to begin the day for those who have diabetes. This is because the majority of cereals on the market are overly processed and loaded with sugar and carbs. Additionally, they offer very little protein, which is crucial for sustaining a stable blood sugar level throughout the day. It’s advisable to avoid cereal for breakfast and choose meals high in protein and low in carbohydrates.